The majority (75-80%) of the water produced and distributed by SWDE comes from groundwater sources.

This water comes from the infiltration of rainwater into the ground. This percolates through gravity into the pores, microcracks and fissures of the rocks, wetting deeper and deeper layers until it encounters an impermeable layer. There, they accumulate, filling the smallest void, saturating the subsoil with moisture, forming a reservoir of groundwater called an aquifer. The water table travels underground along the impermeable layer, following the contours, sometimes for tens or even hundreds of kilometres, before emerging into the open air, feeding a spring or a river.

There are 4 types of groundwater intakes and each has its advantages and disadvantages:

The 20 to 25% of surface water withdrawn by SWDE comes mainly from the four large reservoirs in Wallonia:

Treatment of surface and groundwater catchments

As groundwater infiltrates the soil, it passes through several layers of soil and rock, which naturally remove impurities from the water, while at the same time loading it with man-made pollutants such as nitrates, pesticides and hydrocarbons. They must therefore be treated before they can be consumed.

The same applies to surface water, which is also exposed to natural and human pollution and therefore needs to be treated to make it drinkable.

In order to limit the quantities drawn from weakened groundwater, mainly in Hainaut, we also use drainage water (resurgent groundwater) from several quarries in Hainaut. Our objective is to reduce water withdrawals by making rational use of the available potential.

New resources are also being sought elsewhere in the territory through prospecting campaigns.

A rationalisation of water intakes is under way at the Walloon territory level. It aims to eliminate catchments with quality or quantity problems by interconnecting networks. 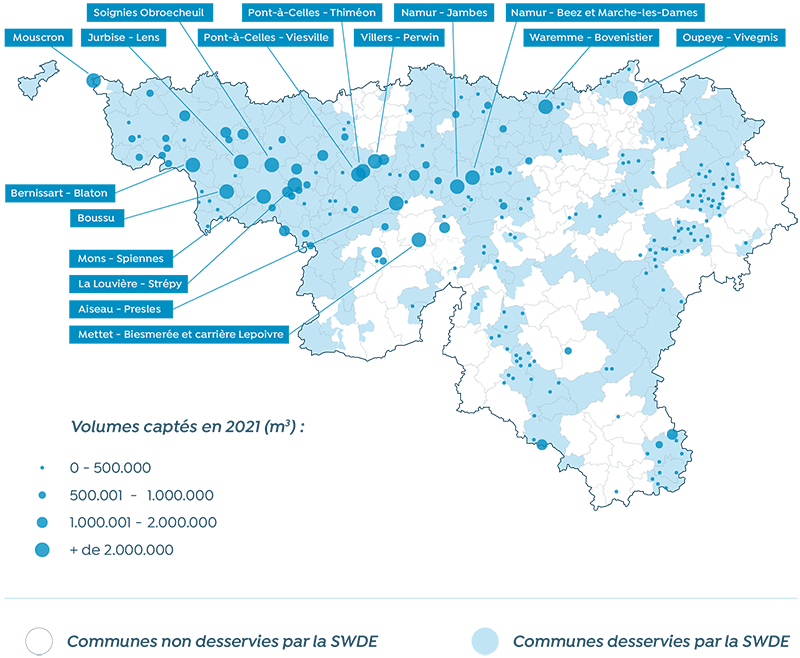